Keyboard shortcuts are a quick way to enter commonly used commands with your keyboard.

You can create keyboard shortcuts for options in the main menus and for text operations In the “Papyrus Keys” dialog under “Options” → “Keyboard Shortcuts…”  Here you also can see and change the preset keyboard shortcuts that come with Papyrus Author. 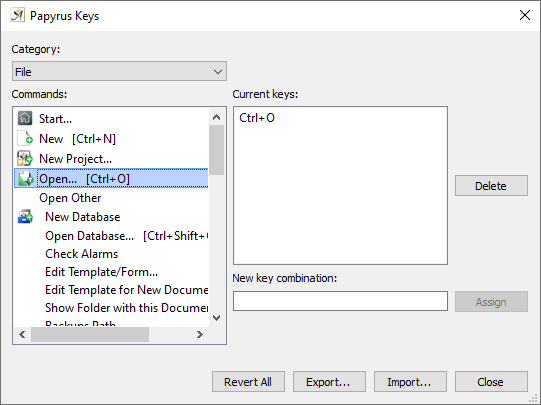 The shortcuts are divided into the following categories:

Some menu items have been assigned more than one shortcut (used when, for example, the user expects a certain shortcut also used in MS Word to work in Papyrus Author).

User-defined shortcuts will be shown with a “>” before them in the list.

A shortcut that comes predefined in Papyrus Author, but which you have assigned to another command will be shown in brackets.

Warning: In Windows the shortcut Ctrl+Alt+<key> cannot be used because these are reserved for the operating system. In Mac OS X you should avoid using the shortcut keys for special symbols and graphic options: the “Alt+…” shortcuts, unless you know what you are doing. Otherwise, you could create a conflict with shortcuts already used in your operating system.

In Papyrus Author “Preferences” → “User Interface” → “Keyboard and Mouse” you can access display settings for keyboard shortcuts, the mouse pointer and other settings.

Display settings for the mouse, keyboard shortcuts and more

Display keyboard shortcuts in context menu and tooltips” will display the commands linked with shortcuts not only in the menu, but everywhere.

You can also set how far a graphic object should be moved with your arrow keys.

There is an option to “Hide mouse pointer while typing”, if you find it bothersome.

There are also buttons that will open the dialogs for keyboard shortcuts and text macros.

All of the following keyboard shortcuts can be redefined if you want. The following list contains the default settings.

The shortcuts are sorted by the following criteria:

The shortcuts for the menu commands can be found in each menu list.

The shortcuts are displayed in the menus

Then there are the special keys, shown here in plain text:

Backspace deletes a character to the left.

–The Apple command key works, for the most part, like the

–The Apple control key works for other functions in Mac.

Any type of selection in the direction of an already-selected block will deselect the block by the appropriate entity.

Any type of selection in the direction of an already-selected block will deselect the block by the appropriate entity.

Shortcuts in Papyrus Base (Windows)